After a long weekend at The True Cost of American Food Conference, I recently arrived on an early Monday morning to a dimly lit conference room at the Department of Public Health, which is housed in what used to be a Masonic Temple. Though I had entered under the watch of Charity, Fortitude and Truth (see: Masonic Temple), I was expecting a day of Prevention, Accountability and Obsolescence. I was signed up for a June session of Manager’s Food Safety Certification Class & Exam, but was hoping to sit in on the April session to get through it sooner. Luckily, there were enough no-shows (really, people? you spent the time and money signing up! why not show up?) that I could learn and test that day. 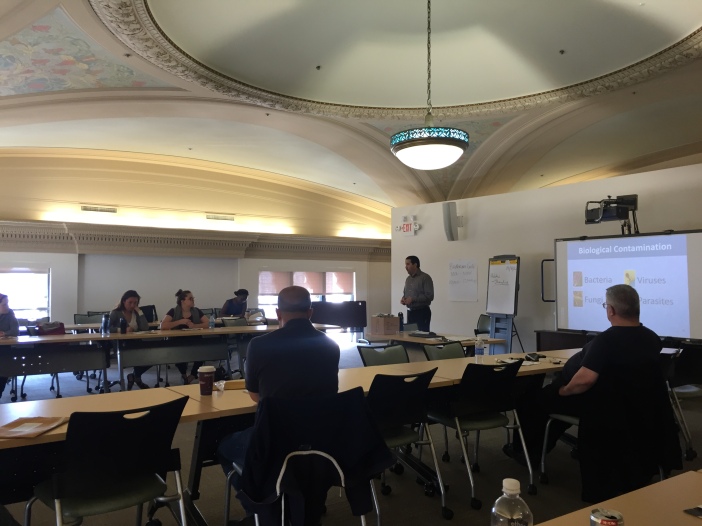 I was there to comply with California Law, which states that every retail food facility must ensure that:

I had taken #2 a few months ago, so all that was left was #1. Even though I don’t have a retail food facility yet, I know it’s super important to share with customers (current and future) that I have the proper certifications to be preparing food for them.

So it’s scary. I am personally concerned about the lack of guidance (in the class) around produce temperatures and how long cut produce can sit at room temperature or remain fresh in the refrigerator. We were tested on general guidelines, but I know it’s up to me to test scenarios as I build Nibble, and document my procedures. I actually love this behind-the-scenes operations of taking diligent care of those ingredients that will be in each Nibble snack, so I find this sort of challenge both interesting and satisfying. In the meantime, I’ve been a bit more careful about which food establishments I frequent since I took the class… because you just never know.